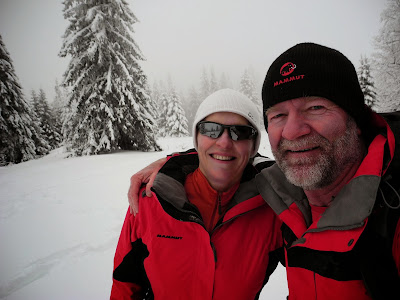 Looking gnarly (the one on the right that is) at the top of Haut du Mollendruz.

With the days being so short at this time of the year (winter, December), a snowshoe hike to the top of Haut du Mollendruz (1441 metres) turned-out to be an ideal destination ... and a perfect way to spend a winter weekend day. Mollendruz is a short drive from St George, and we go there regularly on our expeditions into the Jura - as it is where the Col du Mollendruz, one of only a handful of mountain passes that cut over the range, provides access to the Lac de Joux. The road over the Col runs between between L'Isle and Mont-la-Ville (and Lausanne) on the eastern side of the main Jura ridgeline, and Le Pont - in the Vallée de Joux to the west.

The hike to Haut du Mollendruz was our first snowshoe expedition of the winter ... an event which is always worth celebrating. The Jura is a magic place all year round, but somehow even more extra-special when clad in its winter snowy mantle.

We parked our car in the car-park just west of the Auberge du Mollendruz (1174m) and pulled on our snowshoes just in front of the Centre Nordic Sport. Being a relatively short walk, we had decided to wait until about 10:30 to start the walk. No rush today. This is the most popular starting point for walks to the nearby peaks, although there are good trails up from Montricher and Mont-la-Ville - for those who have a bit more time or want a longer uphill hike. The Auberge dates back to 1882 and still does a roaring trade throughout the year. Apparently its specialties include "baked Vacherin and cakes". Sounds yummy, but not for us today. We were off to burn calories, not find them. 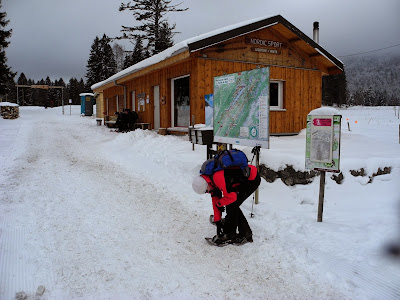 As the information panels, maps, signs and trail-markers showed us, this was the start of the Nordic skiing and snowshoes trails that head south of the Col towards Le Chatel, and the Col du Marchairuz further south. We'd previously done the southerly snowshoe hike to Le Chatel (last winter), but today had our eyes focusing more to the southwest - towards the summit of Haut Du Mollendruz. 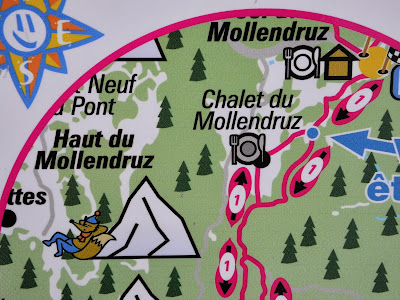 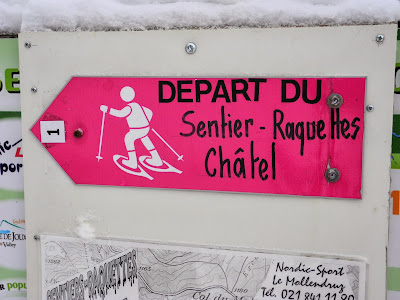 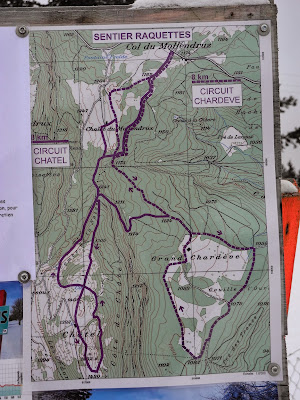 Trail sign showing route to Le Chatel (far south) which we had hiked to last winter - in February. 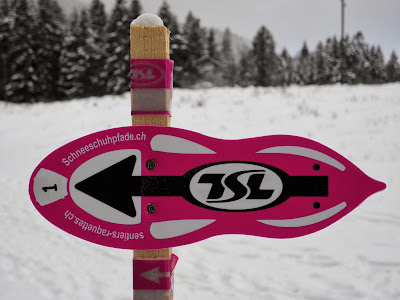 We followed the trail (and its copious accompanying trail signs) southwest of the Centre Nordic Sport for about 400 metres where we came across a small wooden hut. We stopped there for just a few minutes - mainly to adjust our gear and packs, and to check-out the trail signs. And to take a few photos of course. 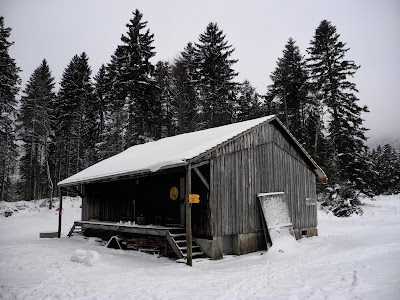 The hut at 1182m, just southeast of the Col du Mollendruz. 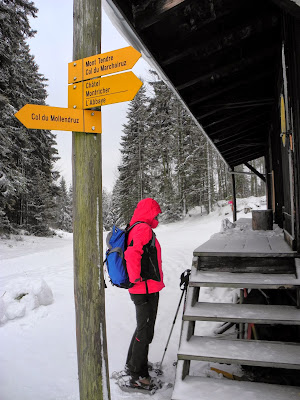 Adjusting our backpacks and stuff, before heading to the right - on the trail that leads to Mont Tendre.

The  snowshoe trail headed straight on - south from the hut, while the traditional yellow markers showed the summer route heading off to the right, to the southwest - which would lead us to the Chalet du Mollendruz - our next landmark and intermediate destination.

This was only about another half a kilometre or there-abouts down the trail, so we soon spotted its snow-covered roof peeking over the horizon. The Jura has had some fantastic snowfalls already this winter,including some fresh snow in the last week, so the trail was lovely and deep and soft: pure white in colour, powdery in texture, and just magic underfoot. As at the start of all of our snowshoe hikes, we both crunched our way along the trail wearing a big grin on our face. 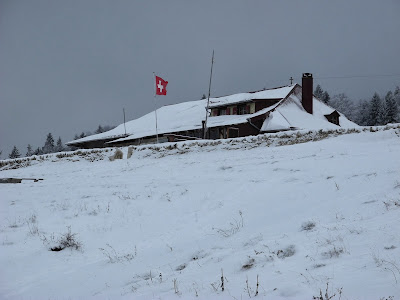 With each passing metre, the Chalet loomed more and more into view, and we were soon cutting our way up the slope just to the east of the buvette, and around its southern side. There were already quite a few people inside enjoying some winter warmth, and a few hardy souls outside, including some children tobogganing down the adjacent slope. We cut fresh steps across the snow  to where we could intersect the main trail that heads south of the Col du Mollendruz - towards Le Chatel ... and the Col du Marchairuz further down near St George. We couldn't see the top of Haut du Mollendruz - due to it being enveloped by grey clouds and thus hidden in the white-out layer above us. Hmmm. That sight brought-on a moment of reflection. That's where we're heading. 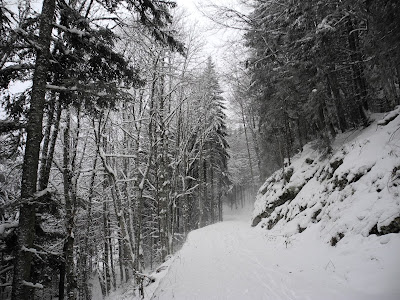 We turned around and took one last look at the relatively clear skies around us, then plunged into the forest near the Creux au Cheval. The forest is called the Bois des Croisettes - the same name as a farmhouse that showed-up on the map not far to the west - Les Croisettes. About half a kilometre down the trail from the Chalet du Mollendruz, we left the main trail and turned right onto a forest track that zig-zagged its way up the hillside, deeper into the forest. Not too far along the route we came upon the lovely little Le Praley mountain refuge (1318m) ... where we promptly decided to stop for lunch. It looked just too inviting and comfortable (compared to our other option of sitting down for lunch somewhere in the snow). 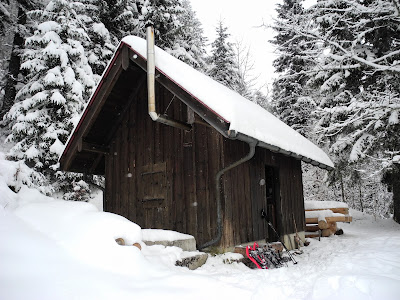 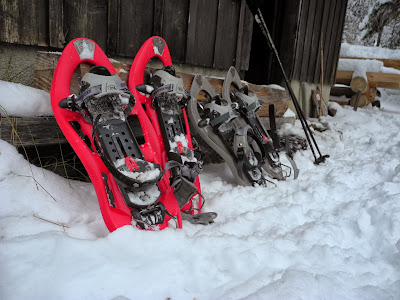 Our trusty snowshoes outside Le Praley.

We took our snowshoes off outside the hut, then went in to enjoy the comfort and convenience of the refuge (it has a table and benches). Le Praley is always open, and well stocked with firewood for its tiny pot-belly stove. It is also well equipped with the usual assortment of glasses, barbecue utensils and the like. It even had a pack of cards (in case we got bored), as well as a stack of visitor journals, matches and candles. Visits to the hut are restricted to a single day, and sleeping (in the cosy-looking loft) is not allowed, except in emergencies. It has the usual rules of restocking the wood heap, taking all of your own litter with you, and leaving the place as clean and tidy as you found it. 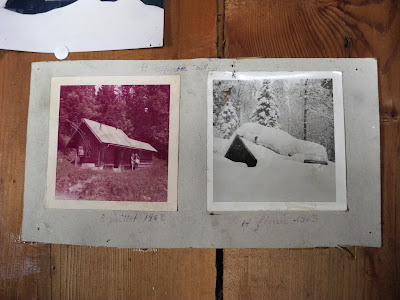 Photos on a wall inside Le Praley show the extremes between summer (July 1962) and winter (February 1983) conditions.

We checked-out the hut from one end to the other (which didn't take long ... as its interior dimensions are only about three metres by four metres), then sat down on the bench seats, and ate our cheese sandwiches and drank our hot tea. We were soon back on the trail, heading first south from the hut, then swinging back around to the north - in a north-northwesterly direction. With regular checks of the map and GPS, we managed to pick-up a tiny side-track that headed-off to the west - that took us up to the southern end of the Haut du Mollendruz ridgeline. Once we encountered that, we swung north again and started a slow climb up to the top of the mountain. 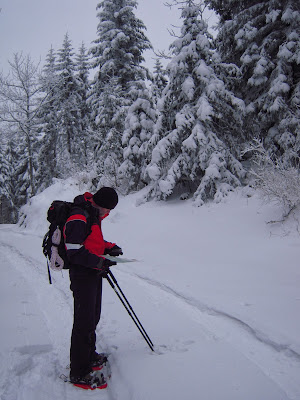 Checking the map and GPS on the trail inside the Bois des Croisettes.

It was lovely going - across fresh powdery snow about 30 centimetres deep. We were having fun. All around us the forest looked like we had stepped into a Christmas card - with all of the conifers covered with a gorgeous mantle of soft white snow. Just metres above us we could see the clouds racing over the top of the range, while all around us the clouds closed-in - preventing us from seeing any further than a couple of hundred metres. It was a magic place to have all to ourselves. 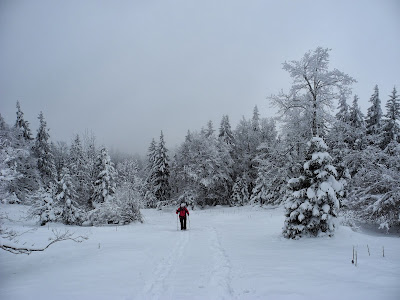 As we expected, and planned, it didn't take us very long to get to the summit (arriving there at about 2pm.) Somewhat ignominiously, the highest point had been chosen by the farmer who has the run of these hills (during the summer months only of course) to build a small corral. No doubt if we were up here in mid summer, there would be cows wandering around the place - enjoying the lush alpine pasture grasses. 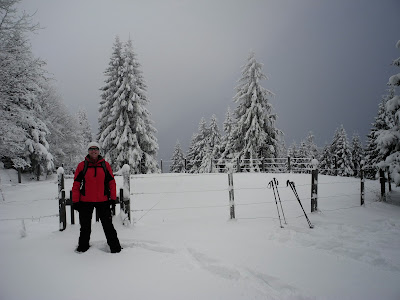 Lis standing at the highest point of Haut du Mollendruz.

We only stayed around for about half an hour: Just long enough to check the place out, take a few photos - of me with the Swiss flag (as is our custom), Lis doing a snow angel in the gorgeous soft snow, and the surrounding landscape. We celebrated with a shot of Marc from my "emergency" hip-flask, and then finished our sight-seeing and started on our way back down the mountain. Just a hundred or so metres above our heads we could see the clouds racing as fast as we'd ever seen clouds move, and we were glad the Haut stopped at 1441, and not 1541. It looked ferocious up there.

Even if it had been clear, I'm not sure there would have been great views from the summit, as it is mostly surrounded by the coniferous forest. I doubt that we would have been able to see Le Chatel, or any of the other nearby Jura peaks (such as Dent du Vaulion - to the northwest, or Mont Tendre - to the south). 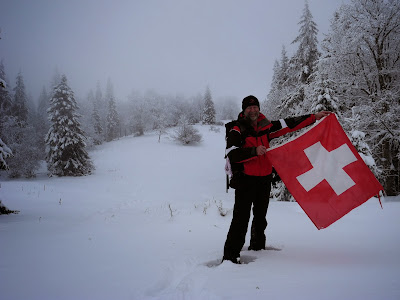 Flag-waving ceremony at the summit of Haut du Mollendruz. 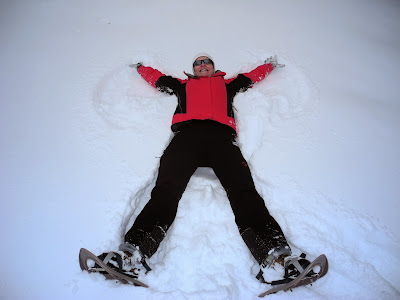 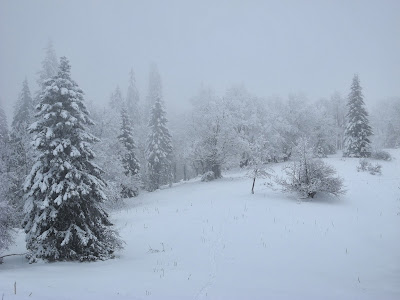 We frequently glanced over our shoulders as we headed down the trail, to see if the wind was going to drop down onto the mountain, or to see if the clouds would break-up and shed some sunlight on the Jura during the walk home. The sun did manage to break through a couple of times - very fleetingly - but hardly even long enough for me to get my camera out to capture the gorgeous light. 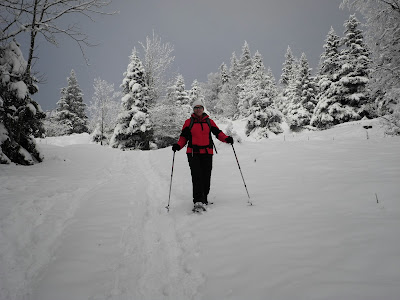 Heading back down the mountainside.

We more or less retraced our footsteps back down through the Bois des Croisettes, either following the marked forest tracks or short-cutting on our own paths through the forest. It really was a treat to be in this magnificent landscape. 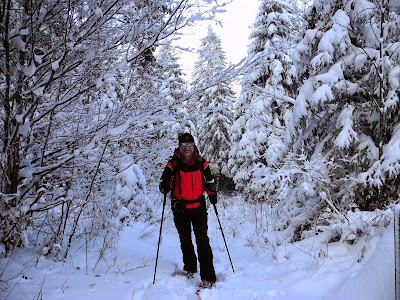 Ideal snowshoeing conditions on the trail. 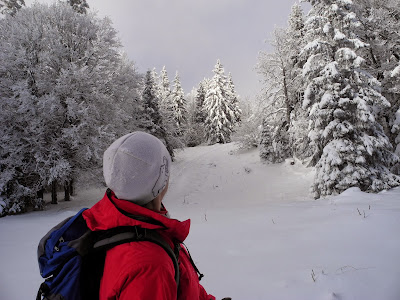 Looking back up the mountain as the sun threatens to break through the clouds. 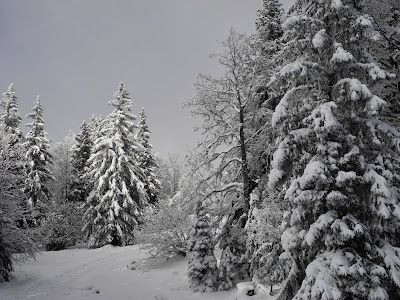 Not surprisingly, it didn't take us long to get back down to the Chalet du Mollendruz which was sufficiently below the cloud layer that the afternoon sun was able to cast our long shadows across the landscape. It was only about 3pm, but being winter, the sun was already very low in the sky. We stopped for awhile on the slopes above the chalet and watched kids tobogganing, and took-in the views of the distant Alps - out across the Swiss Plateau. 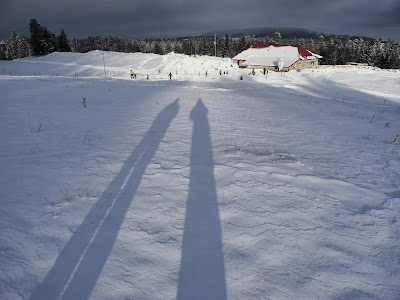 Arriving back at the Chalet du Mollendruz.

The Alps were mostly obscured by the scudding cloud layer, but from time to time we caught a glimpse of the Dent du Midi or other distinctive peaks on the eastern horizon. 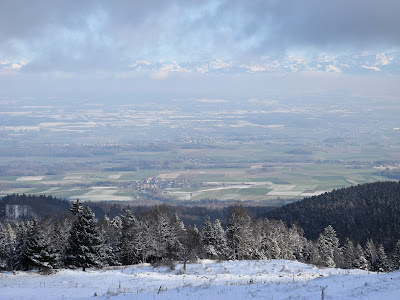 Occasional glimpses of the Alps through the scudding clouds. 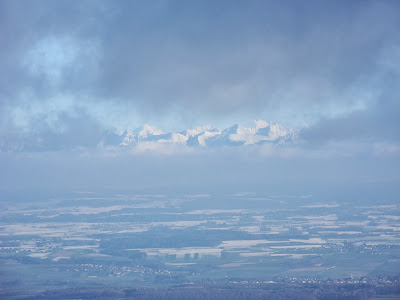 Enticed by the opportunity to drive home in the warmth of the last of the day's sunshine, we soon made tracks down past the chalet, and then on to the Col du Mollendruz. 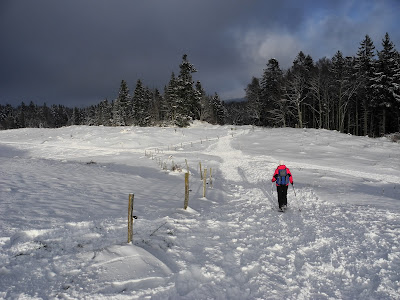 Heading back down to the Col du Mollendruz.

We got back to the car-park at about 3:15pm, where we dropped our snowshoes and tucked into some fruit-and-nuts and the last of our our water - still luke-warm inside our trusty thermoses. It had been a good day, and another great Jura walk.

Posted by Richard McLellan at 2:32 PM 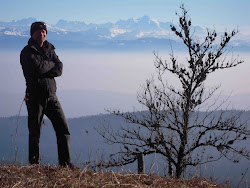 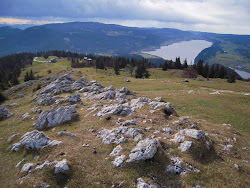 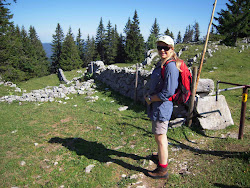