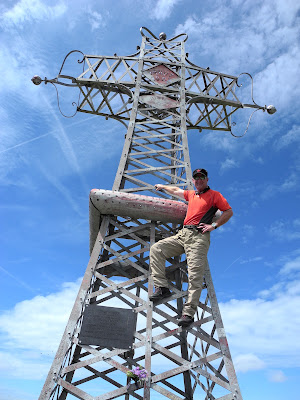 Le Reculet, the second highest peak in the Jura, has been calling me ever since I started this "Seven Summits" project at the start of the year. It's now late July,  mid-summer, with the longest days of the year and lots of beautiful sunny weather. Surely this all adds up to another day's hiking in the Jura with nowhere better to go than to the top of le Reculet - number two on my list. Lis and I had been within easy reach of this summit just a couple of months ago (in May), when we climbed to the top of Crêt de la Neige (about a kilometre to the north), but had decided to "save" le Reculet for a dedicated hike of its own.

As we did for Crêt de la Neige, we drove from our home in St George to Geneva, then up to and through the little village of Thoiry. From there, we finished the motorized portion of our journey along a badly-weathered, pot-holed and crumbling, old bitumen road that ran through les Hauts de Thoiry to Tiocan, where (at 11.15) we left the car and commenced our latest Jura walking adventure. Tiocan, which only comprises a single restaurant/dwelling, is at 860 metres, which meant we had about 1,000 metres to gain in altitude and thus some steep climbing to do today (le Reculet is 1718m). 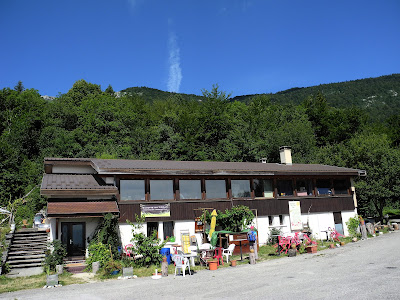 Tiocan's only building - the restaurant.

While we'd taken the steep, but shady forest trail (which starts just to the left of the restaurant) for our trek to Crêt de la Neige, this time we walked up the road to the right of the restaurant for about a hundred metres before turning left onto a dirt forestry road that zig-zagged its way up the mountainside. 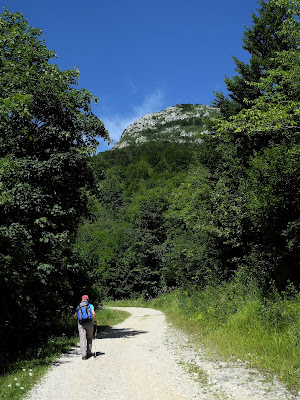 Heading up the forest road towards the first breakaway.

After about half an hour of very steep walking we arrived at le Croisée, where there are two options for getting to le Reculet. We'd gone to the right last time, so this time decided to take the more rugged path to the left, via the Narderan refuge. (Strangely, it was labelled "Narderans" on the trail signs, and "Narderant" on our maps. Yet, at the refuge itself, which we reached about half an hour later, it has an old sign calling itself Narderan. I'm going with the sign on the refuge.) 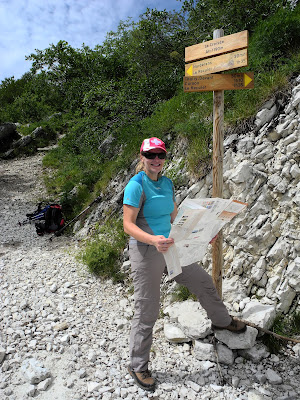 The trail from le Croisée up to Narderan was just lovely, with some good rugged scrambling at places and lots of ledges where one could stop and catch their breath and take in the amazing views over the plains of Geneva, the city and the mountains beyond. There was some cloud blocking-out parts of the Alps, but occasionally we got good views of Mont Blanc, which for much of the day was sporting a quiff of cloud blowing from its summit towards the north. 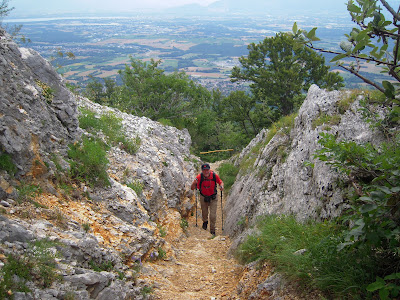 Heading up the trail between le Croisée and Narderan. 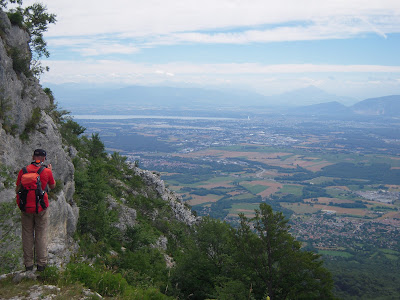 Trail stop near Narderan to take photos of Geneva and Alps. 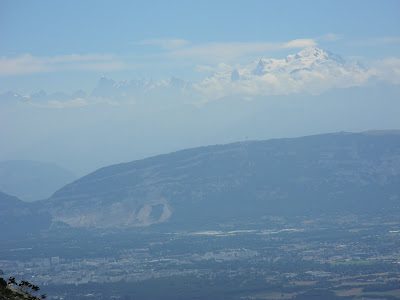 Mont Blanc and its cloudy quiff.

We took a short break at the Narderan trail-sign (at 1330m) - to catch our breath and prepare for the second hour of slogging our way up the mountainside towards the summit. 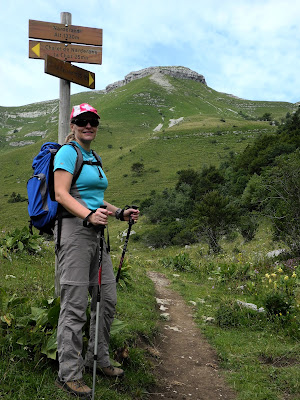 The next section of the trail was up the right hand side of the beautiful valley that encircles Narderan, with alpine meadows spreading across its floor up the bare rock cliff-faces that circled the valley. We stopped for awhile to watch a couple of chamois lazing in the shade at the foot of one of the cliff-faces, then headed-on up the steep and rocky path that wound its way through boulder fields towards a huge breakaway and its characteristic lower scree slope. 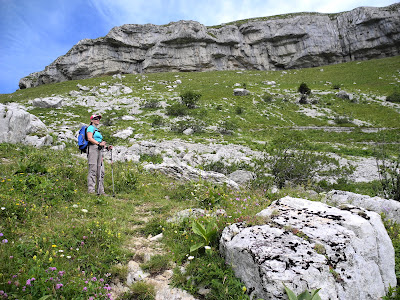 On the trail above Narderan.

The path eventually took us right under the cliffs, where once again we had magnificent views over the valley below us, and the plains of Geneva and the Alps beyond. 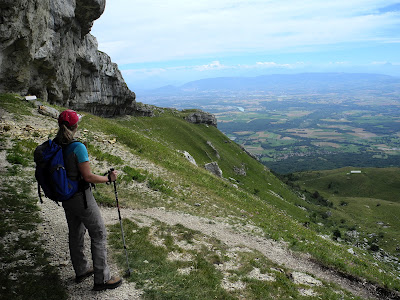 Lis looking down towards the Narderan refuge and Geneva. 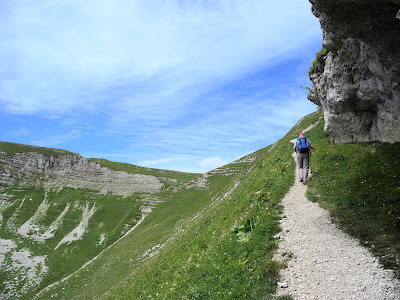 A few minutes later we crested the ridgeline, and got our first glimpse of le Reculet with its distinctive landmark iron cross at its summit. Fifteen minutes later (at about 1.30) we were sitting right alongside the crucifix, taking-in one of the best views either of us have ever seen. We dropped-down on some grass among the rocks and enjoyed our well-earned trail lunch, which we washed down with a couple of cups of nice hot tea. 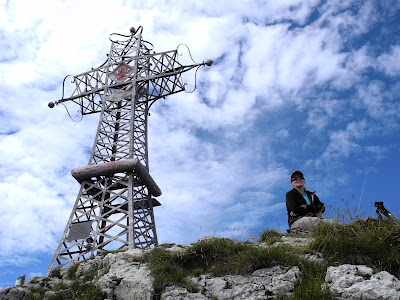 Lis under the iron cross on le Reculet.

Le Reculet (1717.7 metres) is the second highest peak in the Jura. For many years it was thought to be the highest summit, until, as part of a re-survey by IGN France in 2003 and 2004, it was found to be just a couple of metres lower than its northerly neighbour Crêt de la Neige (1720.4m). (You can read all about that controversy on the Cret de la Neige blog - No 1.) 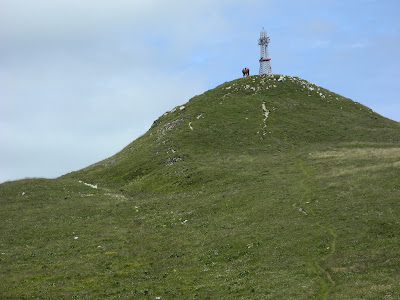 The summit of le Reculet with its distinctive iron cross.

The word "reculet" means a remote or isolated area, so the mountain name refers to it being a secluded, isolated mountain top, far from anywhere else. It's located in the Haute Chaine, the easternmost and highest chain of the French Jura. In the human landscape, it is situated in the Pays de Gex (Département de l'Ain), about 18 kilometres west northwest of Geneva. 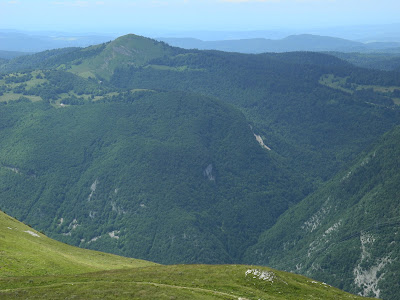 Looking over the Valserine valley towards the western French Jura.

The views from the summit are brilliant. To the west, the ridgeline drops away sharply to the Pays des Gex and Geneva. To the west is the deep, dark and intriguing valley of Valserine and the smaller ridgelines of the French Jura diminishing and disappearing into the distance. To the north rules le Crêt de la Neige, while looking south reveals a string of peaks that stretch all the way to the Grand Crêt d'Eau and its beckoning five summits. 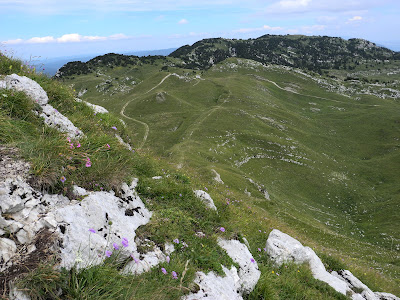 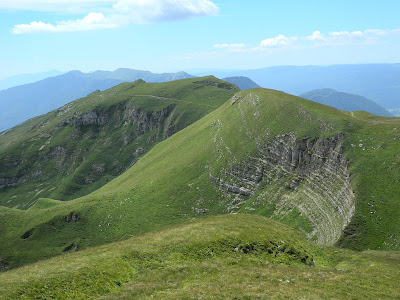 If you're interested in the geology, according to our friends at Wikipedia: